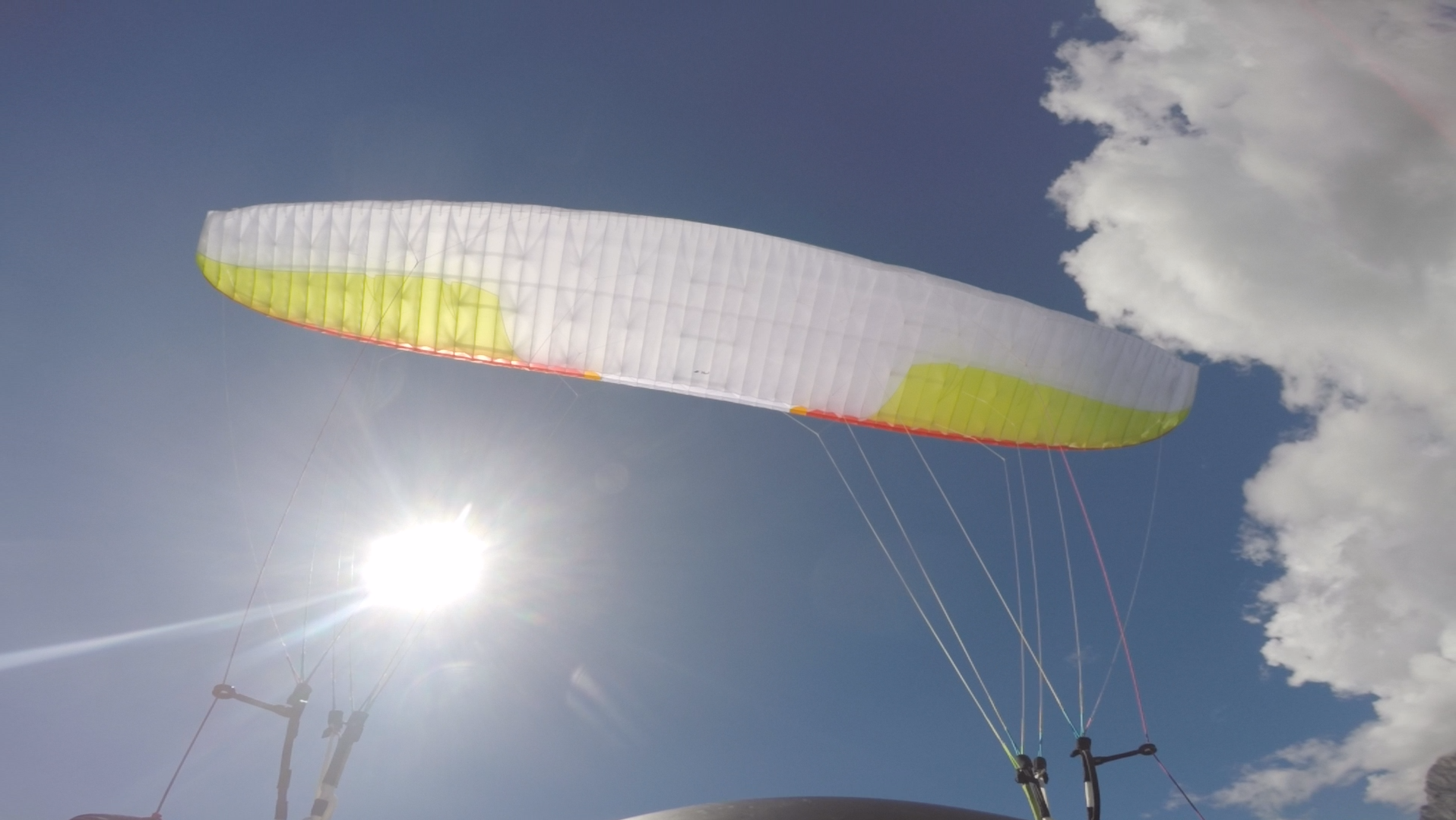 I’m assembling my Vol-Biv gear at the moment. And for the “vol”-part, I need a wing of course.

Please note, that this has been written after doing only some Mini-Bivouc-Tours and a substential of research. We will see how the decision proofs suitable in real conditions.

When I started to test (back in July 2016), I went for a high-B wing, the Niviuk Ikuma P. The Ikuma was not in my scope at all, because there was no light version available. At a local testival I was told the Ikuma is coming up as a light-version as well. Luckily I got the chance to fly a (back-then) prototype in August. Basically I already decided for this wing. It was the perfect wing for me, with 3.3kg and nice performance. However, I planned to order around January to have it in the next season. In the meantime Niviuk started to extend their Plume-series. And the Artik P became a considerable option for me as well…

So how should I decide? As for most pilots, performance is very important for me as well. However, for vol-biv also the glider-weight and most of all safety are a key-considerations. The wing should allow me to fly in a wide range of conditions, strong and weak. At this point I need to stress that the following paragraphs represent my personal opinion, thinking and ratings of a “perfect” wing. The way I test and rate might or most likely will not work for other pilots. The sole important thing for me is that I find a wing that matches my flying style and therefore allows me to progress safely.

Maybe let me give you an example why I might be a bit off the norm here;  I started flying school on a 19m² Yeti 2011, which is rated as an EN-C wing. In my weight-range I considered it A or maximum B. Why? I made this decision based on the wing’s EN-Test protocol  and the caveat that the Yeti is the light variant of the Bolero, Gin’s School wing. Further, many people told me that I’d never get away from a mountain on this wing. Well, at least it works for a couple valley crossings and flying to my parents for a coffee in mellow mid-february conditions. Agreeably, a glide-ratio of < 6.5 is a pain in the ass for crossings and often left me grounded when everybody else was flying. That’s bascially why I decided half a year ago that I need a wing with more performance.

During my tests, I’ve been flying the Ikuma 21 sqm, 23 sqm and the Ikuma P 21 sqm, the latter was a prototype back then. I did not feel comfortable beneath the Ikuma 23, where I was pretty much in the middle of the weight-range. Yet I immediately got a natural feeling with the Ikuma 21 and the 21 P. With the Ikuma 21 P I finally managed a low-save, at a spot where I haven’t seen anybody thermalling so far. Of course, I also did some smaller collapses (only asymmetric and a quite hesitant) , tested big ears and spirals etc., but I wasn’t very confident to do bigger stuff, since I was not so experienced with extreme flying conditions back then.

Additionally, let me mention some incidents that occurred;

All those incidents left me rather happy, because I could deal with them without tense feelings. Nonetheless, I think this rather emotional low-save paired with me not daring to fly a C-wing back then had the decisive weight in the end. As I keep talking about this low-save flight, here it is:

I started doing basic acro in the winter, mainly to get better and more experienced in critical flying situations. So I did many fullstalls (which are still far from good), SAT, spins etc. This started to give me the confidence to deal with an EN-C wing, and so I ended up with testing the Artik as well.

Testing the Artik P was a bit harder – because no Artik P was available for testing. Also, I wanted to compare the Artik P 21 sqm and the Artik P 23 sqm. The only chance I got was to fly the Artik 4 23 sqm, which is equivalent to the Artik P design. Well, not too bad to get a feeling for it. I flew it at 79kg all up (-1kg of max. weight) and tested both, performance and extreme situations.

For performance tests, I compared the Artik P (green in the image below) to a Golden 4 and a Chili 4, one flown at maximum weight and one +7kg beyond max weight. We were really lucky to get some thermals end of January, but overall it was a very calm day. An animation of the test can be found on Doarama as well:

If we measured correctly, we got the following altitude loss for the wings at the first crossing. Note that  all pilots played with the speed-bar according to their preference, trying to optimize the glide:

So, overall the Artik 4, as an EN-C wing, indeed has better glide-performance than the other two EN-Bs. What’s more important to me, it felt really natural in thermals and allowed me to find and center them intuitively – and again, we’re talking about January in the alps. Toplanding was fine as well, which leaves the question for its behavior in semi-optimum flying conditions; collapses and stalls.

Testing collapses on the Niviuk Artik 4 23m². Flown with the Advance Lightness 2, 79kg all up

Frontstall (0:03): Starts to fly again on its own, yet a little break input is needed to open it again.

Asymm. Collapse / Seitenklapper #2 (0 :45): Without input the glider goes to auto-rotation / spiral dive (trying to pump in the rotation expectedly did not work ;)). After letting it turn a bit, I did a minimal weightshift on the opposite side (1:06 , didn’t even break), which stops the rotation. In straight flight recovery is easy 😉

Overall, I was feeling quite comfy on the Artik 23. Discarduing Ikuma P, yay Artik P.

[Added later]: That’s how the Artik P turned out:

The issue with small wings

Yet there is one major difference between the Artik P 21 sqm and the Artik P 23 sqm; glider weight. The 21 comes with a terrific 3.2kg, while the 23 weighs 3.8kg. A pretty significant increase in my opinion, which is possibly due to construction details. Sizes 23,25  have split A risers, 21 and 27 not. Well, the problem was the weight range. The 21 sqm is certified up to 73kg, the 23 sqm up to 80kg. My take-off weight all-up for XC is 73-75kg, while for vol-biv I expect it to be 80-81kg. So flying the 21 will result in heavily overloading the wing with up to +8kg, while for XC I’m just at the upper limit or slightly too high.

I often overheard XC cracks saying you should fly a wing (in the alps) at the upper limit of the weight range or slightly above. When they say this, they are talking about EN-D or CCC wings. So the question is, is this also true for lower wing classes? Lauren Martins, a female world cup competitor, has an interesting blog post on the topic of small wings. She claims that some manufacturers neglect small wing sizes, simply because the market of light pilots is not big enough. As a rule of thumb she recommends that people in the weight range 60-80kg should fly EN-A with 21 sqm flat, EN-B with 20 sqm flat, EN-C 19 sqm flat and EN-D with 18 sqm flat.  Not only because of performance reasons, but also out of safety considerations. Based on this and my take-off weight of 80kg, the Artik 21 sqm (as an EN-C wing) would be too large anyway.

However, as mentioned in the outline, I tend to look / try out things on my own rather than taking other opinions for ultimate truth. However, Martins argumentation to distinguish between good and “bad” wing design across sizes makes some sense to me. She states that an almost constant wingload per square meter across sizes is signal of considerate design. This sounds legit, since wings are often designed for the M-Size and all other sizes are simply up- or downscaled (careful, my assumption!). This can often be observed when new wings hit the market. Typically the small and large wings are only available/certified weeks or months after the M-sizes.  So let’s assume (no idea if it’s true), the Artik 4 / P has been initially designed for 25 sqm (which is acutally 24.5 sqm flat, beware). From the technical data at Niviuk’s website, we know the maximum take-off weight there is 95 kg, which corresponds to a wingloading of 95/24.5 = 3.87 kg / sqm. Contrary, 73/21 = 3.47 kg / sqm, which is significantly less.

So when I (over)load the 21 sqm with 80kg, the wingloading is still a bit below the loading of the 25 sqm, which we assumed is the “design”-wing. Naturally, I have no clue whether my assumptions (simple down-scaling, development with size 25) is true, yet flying with a wing loading of 3.8 kg, which is pretty much in the middle between minimum (3.47 kg/sqm) and maximum (4.15 kg/sqm) doesn’t seem too bad altogether. Please also note that I did not consider any other aeronautic properties, simply because I don’t know them well enough.

Getting away from hard facts, I still remember the rather unpleasant feeling during my mid-of-weight-range testing of the Ikuma 23, which was in strong conditions and the still impressive low-save in mellow conditions on the heavily loaded Ikuma 21. Obviously high ling loading still allows (me) to climb well, glide should be good anyway (Reynolds number). So I don’t expect the performance to be too bad on a heavily loaded Artik 21 either. Unfortunately I could only test the Artik in weak thermal conditions, however, it was quite windy and I got the chance for a bit of groundhandling and spent quite some time in a Lee-Rotor (25-30kmh wind) to test the feeling in turbulence (probably also not a good advice for other people)

Important: Please note that with overloading I’m flying outside the certified weight range, hence having an accident with an uncertified wing might lead to legal problems. This also means you cannot use this setup in most competitions etc.

Since there was no chance to test the 21m², I had to resort to “theoretical testing” and a pro-con-list. One important aspect is that  So in either configuration, the 21m² Artik P would be flown at the maximum weight or up to +8kg. Naturally, this makes the wing faster and more stable, yet there are also some draw-backs. So in the end, I came up with this pro-con list with 80kg loading on either wing:

In the end, according to my list, overloading the 21m² seems more beneficial. Even more so, since the strong-points of the 21m² tend to be safety-aspects (especially in strong conditions) and the 23m²’sbenefits are more on the performance side. This additionally backs my decision. I rate saftey over performance, while keeping in mind that acro-training should (hopefully) put me in a position to deal with the a bit more aggressive behaviour in the case of collapses. Or in other words, I need to start training collapses on the 21m² as soon as I have it. The nice thing is that I can simulate overloading by using my Acro Base Harness, which makes training over ground a bit more secure 😉

For the reasons and aspects discussed above, I ordered the Artik P 21m² – I’ll update this entry as soon as I have more details if all theoretically expected aspects become true. And of course when the first tours are done 🙂

One Reply to “Finding a Vol-Biv wing”